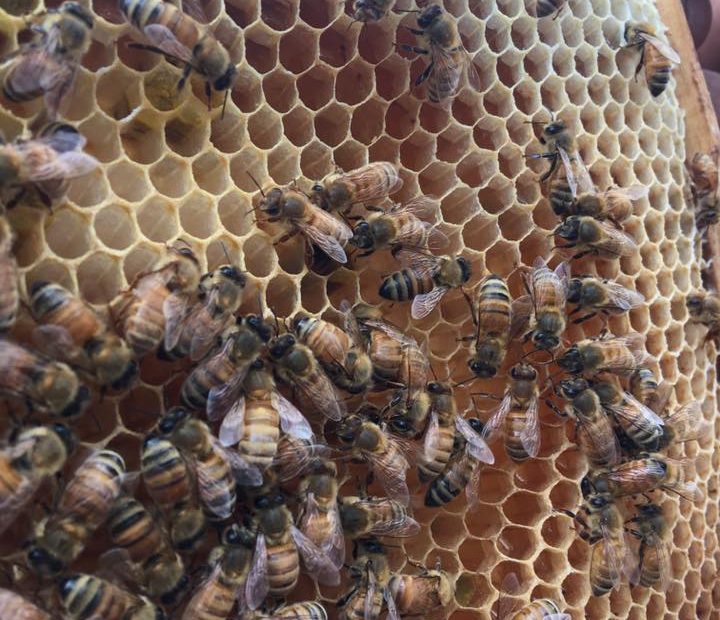 We ended summer and transitioned into fall quickly. We got our hives ready for the winter by doing a couple of new things to us. Unfortunately, we still managed to loose them. We have some new plans for this and hope we are on the right track with winterizing them. Read more below on what happened and what we have planned for this next year.

We started out this season with 6 pounds all together, 3 pounds in each hive. Like I stated above, the one hive was making all kinds of bees, so this one hive got huge. We had feared that this hive was going to swarm, so we paid a lot of attention to it and made sure we made lots of room in this hive.

Because we were so concerned about the big hive and weren’t really concerned about the second one we had, we just kept going on about a normal season. Checking hives when needed, filling their sugar water jars and making sure they were producing honey.

Well, than came the day when we learned we really should have been paying more attention to the smaller of the 2 hives and adding maybe another box onto it. I was home one day for lunch break and the smaller of our 2 hives, decided it was running out of room and decided to swarm. What an EXPERIENCE. Not something you really want to happen and its pretty rare that a person gets to see this happen, I just happened to be in the right spot at the right time.

All of a sudden I heard the bees buzzing really loud (I eat my lunch outside during the summer) and I took a walk across the yard and the bees were POURING out of the hive. Nothing I have ever seen before. As I am watching this happen, the dog and I are on the back side of the yard and I look up and the ENTIRE backyard was FILLED with bees. I couldn’t believe what I was seeing. Thousands of bees just flying all over the place.

Luckily I had a long enough lunch where I was able to stay and watch where they were going to go. At this point I have called Mark and explained what going on and he said to just see what direction they go and hopefully we can find them. We don’t want them going into someone’s eaves or siding and causing more problems. So I watched for a good while, at this point our neighbors have come home and seen what was going on also.

This hive surprisingly swarmed in a tree in the backyard. Of course higher than we could reach with any sort of ladder, but close enough where we could see them. So Mark did some brainstorming and tried to figure out how we were going to get this hive back.

He ended up using a fishing net with a garbage bag in the inside, his dad came over with a branch trimmer and they made a long pole out of some wood we had laying around and Marks dad cut the branch that the bees were on and they fell right into the net Mark was holding out. He was able to shake them into their own hive and hope they stay without choosing to leave again. So at this point we have 3 hives all together

When a swarm leaves, they typically only take half of the hive and the queen. The other half stays back in the hive and creates a new queen and they continue on working. Meanwhile the other half of the hive has to find a spot to settle (if you don’t get them back) so they can continue on working as well. If you are able to save the half that swarmed, you can’t put them back into the original box or they will leave again because they recognize the smell and the queen knows she left it for a reason and when she leaves, the hive follows her.

Fall came quick around here and after doing extensive research I really thought we had everything together we needed to, to get the bees to survive our frigid winters in Northern Wisconsin. Reading up on this can be challenging, there are some techniques that work for people and those same techniques may not work for someone else.

In our reading, we found some techniques on how to keep the moisture out of the hive. Now some beekeepers will claim that this step isn’t necessary but I truly think that depends on your location. Us being in town, there is more moisture in the air, so we believe this step is necessary for our hives. It gets VERY cold around here during the winter, 20-30 degrees below zero (and than some) for those of you who aren’t from around here.

We took empty boxes and stapled a cotton t-shirt to the bottom of the box and filled said box with some shavings. The shavings are meant to keep moisture out of duck/chicken coops, so we felt this was a good options. The cotton t-shirt is also meant to wick the moisture and keep the bees from freezing from too much moisture.

Now, when we started this bee season, they were kicking butt and had a decent amount of honey already produced by July, so we went in and harvested. We harvested because we were afraid of this hive swarming. A swarm happens when there is too many bees and no where to go and no room to continue to work and make more bees. The best way to prevent a swarm, is to remove some of the honey so they have room to continue to work without feeling over crowded.

This large hive had produced I believe about 4-5 gallons of honey in July. With the way this hive was producing both bees and honey, we didn’t think taking this much from them was going to be a big deal. They should have continued to work as they were until the end of the season, or so we thought.

Come the end of the season, this hive is STILL making bees and minimal honey was produced in the last couple of months. Which wasn’t what we were expecting. We were really hoping to get at least one more harvest, if needed to make room otherwise they should have made enough to allow them food for the winter.

Because of them being short on food, I did some more extensive research and found ways to make them sugar patties with sugar, vinegar and water. Good easy source of food for them for the winter, we would just need to add some throughout winter.

As winter came, we thought we had everything together and had a good feeling that the hives were going to survive. We had their food, the shavings to remove moisture and some hope. Things were going really good for us, we were having an unusually warm winter and not much for below zero temperatures.

Early winter, we found we lost the first half of the swarm hive. The half that stayed in its boxes and never left with the queen. We aren’t sure what happened with this one, we thought it was dwindling down throughout the fall months, but hard to tell.

The first week of January, it was around 40 degrees and the bees decided to come out and do some flying. We had hope that this was a good sign, they’ve made it this far, we must be doing something right.

A couple more weeks went by and temps were above average so we did a hive check. We pulled the lid off to get them some food. Only to discover we had lost our large hive. Now, due to the lack of honey they produced we weren’t certain this one was going to make it. There were SO many bees in this hive to start with, more bees more food to be eaten. Checked out the smaller hive and that one was still doing good, gave them some food and figured we would check back in a couple more weeks when it was warm and give them some more.

Came back a week or two later to feed the last and only surviving hive.. opened the lid and this one was also a goner. At this point it was about the middle of February and the temps were starting to get warmer. We were in the home stretch and they just couldn’t pull through.

After investigating the hives, by bringing the frames and boxes into the garage to stay dry. We are almost certain that they had starved. All the frames were empty, not a drop of honey left in them. Which we were afraid of happening after we realized they weren’t producing honey as they were supposed to towards the end of summer. However, this is where the food I was making comes in. But maybe because of the warmer winter, they were moving around more which only makes sense that they would eat more as well, that’s just an opinion though.

We were on the right track, we kept the moisture out, they had SOME food, just not enough. This has been all a trial and error for us. Its unfortunate to have lost some really good hives, but we are getting somewhere and I truly think this next year we can get this down.

We just put in our order for 6 more pounds, hoping to arrive around the beginning of May. We will than start with another 2 hives and continue on with our beekeeping. Our plan this year though, due to us really having enough honey for ourselves, we aren’t going to harvest this year. We are going to let these hives work their little butts off and hope they do what they’re supposed to all summer.

We don’t need to take from their food source, since we have so much left over from last year. This gives them a chance to get nice and strong and hopefully have the potential to survive throughout the winters. A lot of people around here are able to do it, so I know we can too.

It has been really fun (for myself) learning about the bees and the techniques that do and don’t work for us. Marks family has been beekeeping for many generations at this point and I feel honored to have gotten to partake in this and learning from Mark and his dad. It’s also really great how much of my family has taken an interest in them and are thinking about starting their own hives as well.