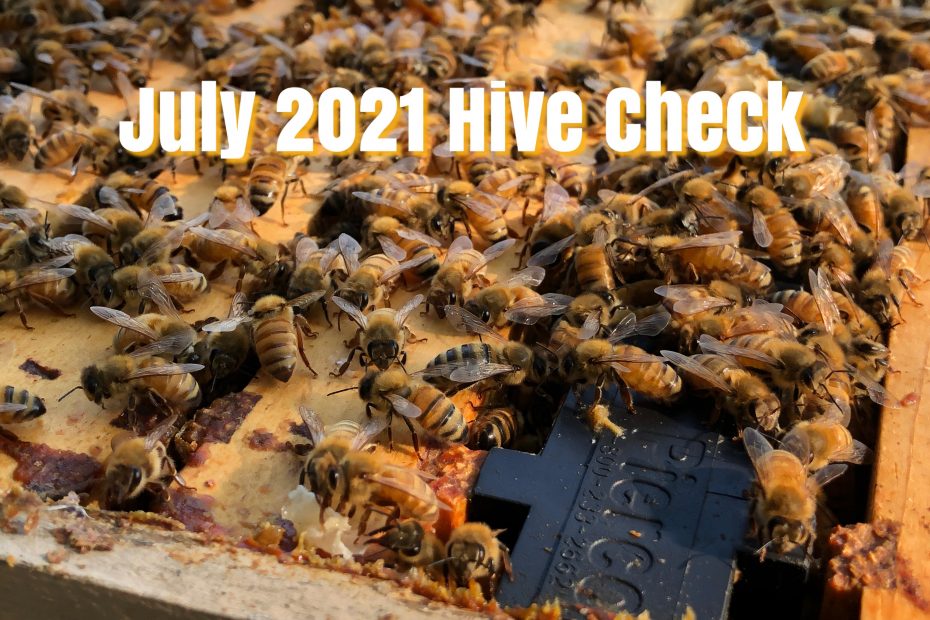 This weekend we decided it was time to take a look at the hives and also help support the hives a little better. In my previous bee post I had shown how Mark made our little hive table with an old outside table and some fence wood. It worked really well, has been keeping the bees off of the ground, to hopefully control their moisture but we noticed something not so good last weekend and knew we needed to take care of it right away.

We were in the backyard looking at the hives and realized that the bigger of the 2 hives, was leaning REALLY bad into the the center of the table. To the point where Mark got out his car jack and jacked it up so it wouldn’t tip over completely. That would be a MESS. The jack was able to hold us over a week until we made a trip to Menards and got some Uni-struts.

We needed something stronger than wood. I bet each box when full of honey weighs between 50-75 pounds. This one hive that has 1 deep super box and 2 supers. So if you are a math wiz, you already have the math figured out. For those of you who are like me and aren’t so strong in math, we are looking at 150-200 pounds, is what this hive weighs. As you can imagine, a flimsy wood would not hold this up.

So Mark picked up some uni-struts and did some measuring and we got these pieces set underneath each hive. Mark chose to go the short ways, so both sides of the hive would have some secure support. This part was tricky though, as I said earlier that one hive is HUGE and you can’t just lift that by hand and even if you could, you still have to be gentle as there are THOUSANDS of bees you don’t want to upset.

Mark was able to lift the smaller of the two hives and slide the struts underneath it. We just lifted one side at a time a little over an inch and slid it the strut into place. This hive was easy to work with. Once we got this one set in place, we decided it was time to take a look inside this hive and see what was going on.

When we bought our bees this year, we decided to go with 2 different kinds of bees. Carniolan and Italians. We have always had Italians, because we had heard that the Carniola’s can be cranky sometimes and being in town we didn’t want to have cranky bees. But we were reading on them and decided we were going to give them a try, they are supposed to be good honey producers and stronger throughout the winter months.

Our smaller hive is the Carniola’s, and we originally thought they were behind because the other hive has SO many bees and this one seemed slower. Well we kind of forgot (terrible I know) that we put the Queen Excluder in this hive (Currently only have 1, another is one order). So when we tore into it and realized, they were doing exactly as they are supposed too, they just seemed slow because of the excluder.

The pictures above are showing what the queen excluder looks like and what brood looks like. If you aren’t familiar with either of these terms I will tell you. The queen excluder is kind of self explanatory but it excludes the queen from part of the hive. The queen is MUCH larger than all the other bees, so she cannot fit through the slots in the excluder. She will stay below the excluder and continue to make bees like she is intended to do and above the excluder is where they will make the honey. You don’t want to have too many bees and not honey or they wont have anything to eat all winter and will end up dieing from starvation (Talking from experience.. Oops.

The brood frames is honey bees before they hatch. As you can see in the pictures the comb that is capped off is a dark orange and kind of solid looking, that is where the bees are. Inside the comb on some, you can see the white spots, those are grubs that will eventually be capped off to turn into bees. You know when people say that bears love honey, that is actually a myth, thanks Pooh Bear. Bears actually are going after those grubs to eat, not the honey. Same thing with skunks, skunks are also a threat to honey bees because they have smaller hands, and they can stick their hands inside the hives door to get at the grubs to eat them.

So in this first hive, we have the bottom filled with brood and the top was filled with honey. The excluder was working just as it should and keeping the hive controlled and not overcrowded but also making a good amount of honey. Below are some picture from this hive and what was all going on inside.

Now that you seen both the brood and the capped honey, you can tell the difference in the two. The capped off honey is lighter in color and almost transparent. Where as the brood was dark and solid.

Now that we have the smaller hive, supported and gone through. Now is time to take a look at this bigger hive, the Italians. This one we knew was going to be a little bit harder, due to its size. Mark decided it was best that we take some boxes off of this one before trying to lift it because the wood was so weak underneath this one. We have yet to tear into this one as of yet this year, we were trying to let them do their thing but at this point they are making a lot of bees and we need to check it out.

We got this support beams under it and decided we should tear into this one. See why there are so many bees and if they are making any honey. We now know that the excluder was working on the other hive and keeping it at bay and we are kicking ourselves at this point for not having another one because we already know there are a ton of bees inside this one. Had we had an excluder on this hive, it would have controlled it some, ya live and learn though, right?

So we start looking at this hive and we find, just as we suspected, a ton of bees. There was SOME honey being made, which I suppose is a good thing. We did not find any brood, which is weird being as there are SO many bees at this point.

Since there is no brood inside this hive, that makes us believe that there is no queen in here. It is not uncommon for this to happen. Sometimes its because the hive swarms or the queen gets sick. We know they didn’t swarm because there is so many bees so maybe she got sick? As we are tearing this apart, we are trying to find a sign of a queen, but there wasn’t much to go off of, just honey.

But than we spotted what they call a queen cell. A queen cell is what a new queen grows in here. It is very distinct looking and you can’t typically miss it when growing through the hive. Once this queen hatches and if there is more than one that hatches at the same time, the first to hatch kills all others. She is the queen now and can’t have more than one.

We went through most of this hive and only found this queen cell and honey. We never did find the queen, which could also mean maybe shes on her mating flight? We really don’t know at this point where the queen is or if we just overlooked her and missed her.
This hive will be getting a queen excluder late this week, once we find her and can keep her at the bottom so that she stops making too many bees and they can continue to build their honey supply.
We don’t want to take any honey this year because we want them to have enough food source to survive through the winter.

Our hives are very strong this year and are doing well. We do need to tone down the one that is larger than the other but at least they are still making honey and there was no sign of more bees for now.

We still don’t plan to extract any honey this year but if it comes down to running out of room, we just may have to at the end of the year. We are waiting to see what happens throughout the rest of the summer.

I hope we get to look into these hives at least 2 more times before we close them up for the winter. Honey bees really aren’t as hard of work as some people think. They are natural insects that can survive on their own in the wild, so they really don’t need much work. You just have to know what to watch for if they get cranky and when to add more boxes to them. They do the rest of the work for you, which is why we aren’t poking at them much. We would rather they do their own thing and we just keep them happy.

Thanks for reading and checking out how bees do all their work. This has been a fun experience for me and I honestly didn’t know anything about Honey Bees until I met Mark and his family. It has been something his family has done for generations and I am honored to have learned so much from them. I look forward to sharing more about them as times goes on. Please feel free to comment and ask any questions you have.

Have a good rest of your summer!