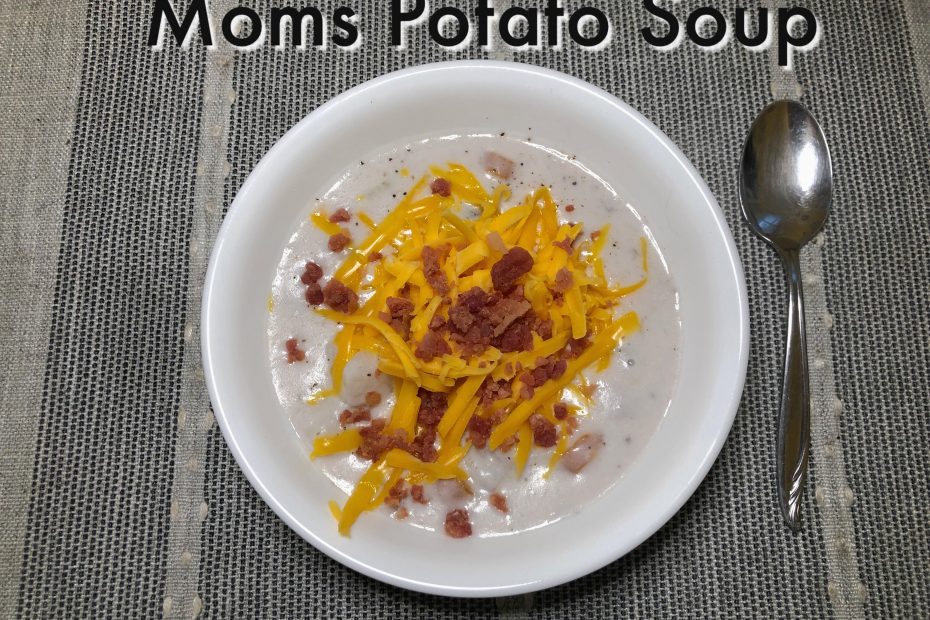 My mom has been known for her delicious potato soup recipe. She hears anyone is sick and she gets out her big pot and throws together a batch of soup for them. She’s a great person, like that.
The best part about this recipe is there is no measuring. I know, it sounds crazy to most people but I promise, this recipe is simple and delicious.

What Do I Need To Make This Soup?

All the ingredients needed for this soup can be found at your local grocery store. If you have been following me for some time now, yes I did get most things at the Farmers Market.

You can certainly leave something from this list out if you wish, or add something else if it comes to mind. There is no rules on how you make this delicious soup.

How Do I Cut Up My Vegetables?

Again, there are no rules to this and the amount you use. Just toss in as many and how much as you would like. I dice up my potatoes into small bite size chunks and than I cut my carrots up, sometimes smaller and larger pieces.
I’m not a huge fan of celery but I do love the smell of it and the flavor it gives in soup, but I don’t like just plain celery so I cut mine into small pieces.
Onions and Garlic can be cut into small pieces. I typically mince my garlic but can leave it bigger if you like. Onions I left in fairly larger pieces so they didn’t break down too much.

How Do We Make This?

Now that all your vegetables are cut up, this is when you get to throw your things together. Get out your large pot and start boiling your water, once the water is almost boiling, add in your Chicken Bouillon / Better Than Bouillon, potatoes and carrots.
These typically take a little longer to cook, so get these boiling for a good bit before you add in the rest of your vegetables.

Allow the pot to boil for another 20-ish minutes, just until your potatoes are near falling apart. Once the have boiled until tender, you may remove from the stove and dump most of the water out.
Due to me only having 2 arms, I couldn’t get any pictures of this and the one picture I got once I drained the water, came out too blurry to add into here.
But drain the water until almost completely out. If you think its enough, dump a little bit more out – at least that’s what I always have to do. LOL

Add in your heavy whipping cream until just about level with the vegetables.

As with most recipes, you need some salt and pepper. It is amazing how much just a little can make a difference in a dish. I know lots of people who don’t use seasonings in their food, but if they did, their food would only taste EVEN better than it already does. Adding salt and pepper, really does bring out the flavors in things.

Allow the pot to simmer on low-medium for a little bit until the soup thickens. However, if you are like me and are impatient I will teach you a little trick.
If I don’t have time or am too hungry to allow the soup to thicken on its own, I add some cornstarch to the pot. Stir 1:1 Tablespoon of Cornstarch vs Cold Water in a small bowl, and mix into the pot.
This will thicken the soup almost instantly. If its not thick yet, mix that 1:1 ratio again, and as many times needed until the soup is at the desired thickness you would like.

Like I said earlier, this soup is one that does not require any measurements. Moms Potato Soup works best with adding as many and as much of things as you would like.
Top this delicious soup off with some shredded cheddar cheese and bacon bits and serve up yourself a bowl or two.

Let me know if you try this and what you think of it. Drop a comment if you have any suggestions or comments. I love to hear what you guys think.