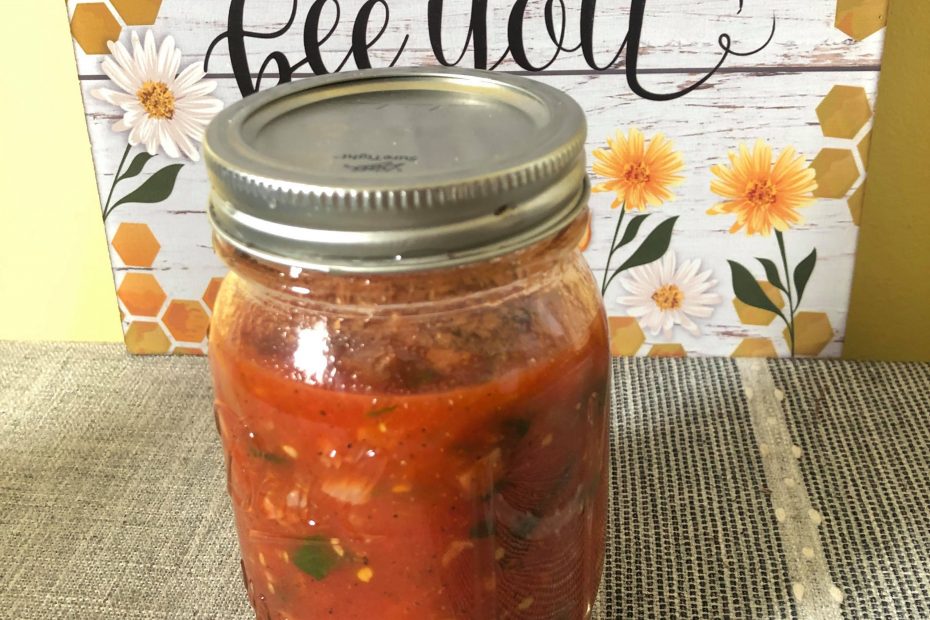 Unfortunately, my garden didn’t grow quite as much as I had hoped, but luckily the farmers market has just about everything you would need to make the spaghetti, so I had to grab some stuff from there too.

How do I prep the tomatoes?

Start by picking tomatoes or purchasing them at whatever store you prefer. The next part is quick and for some reason I was always scared to do this part. It always sounded harder than it really is. You just get your water in a pot boiling and drop in your tomatoes. Boil them until the skin breaks and than set aside to cool, boiling only takes a couple of minutes at most.

Continue to cook these down until they turn into a sauce. While those are cooking down, get the rest of your fixings for your sauce ready.

What else do I add to my sauce?

Not sure if you read my blog about how I spruce up my store bought sauce, but I added the same deliciousness to my homemade sauce. If you click the button below, it will take you to that blog post also.

How to make sPaghetti sauce BETTER

I am partially Italian, so I do love a good tasty sauce. I love lots of flavor bursting from the sauce, so I made sure to do just that in my sauce.

Cut up your fixings, garlic, basil and onions. Chop these up into as small of pieces as you wish, depends on how chunky you prefer your sauce. Set the fixings aside until your tomatoes are cooked down enough to a sauce and add them to the pot.

Finish up the sauce.

Now that your tomatoes are cooked down, add your garlic, basil and onions. Also stir in your seasonings, garlic salt, salt, pepper, dash of sugar, italian seasoning.

Stir everything together and get this ready to jar. Now, this recipe can be made to make enough where you can jar it. However, I did not make enough for that, so we just made spaghetti this week for dinner.

If you made it this far, you will get to see what happens behind the scenes sometimes.

With some recipes there is some mishaps that can and will happen. If I never made mistakes or failures, I would never learn anything. I wasn’t originally even going to write a blog on this but I thought it would be nice if I shared my failures as well as my successful recipes.

I never started with enough tomatoes, never made this before and I didn’t want to make a TON of spaghetti, so I tried making it with just a small amount of tomatoes. Lesson learned that this did not work out as planned, I was short on sauce when I went to make dinner tonight.
Normally wouldn’t be a big deal, but I didn’t have any sauce on hand. So I had to send Mark to the store to get me a jar of sauce to finish up dinner. The sauce I made was delicious, next time I will just need to make sure I start with more tomatoes.

So that is how I made the sauce that was really delicious just not enough like I had expected. I will definitely be trying this again and will make enough to can it, but for the time being this had worked out for me.

If you have any cool tips or things you add to your sauce, leave a comment for the next time I make this.

Thanks for reading and sharing comments.
Much Love *& Honey,
Megan