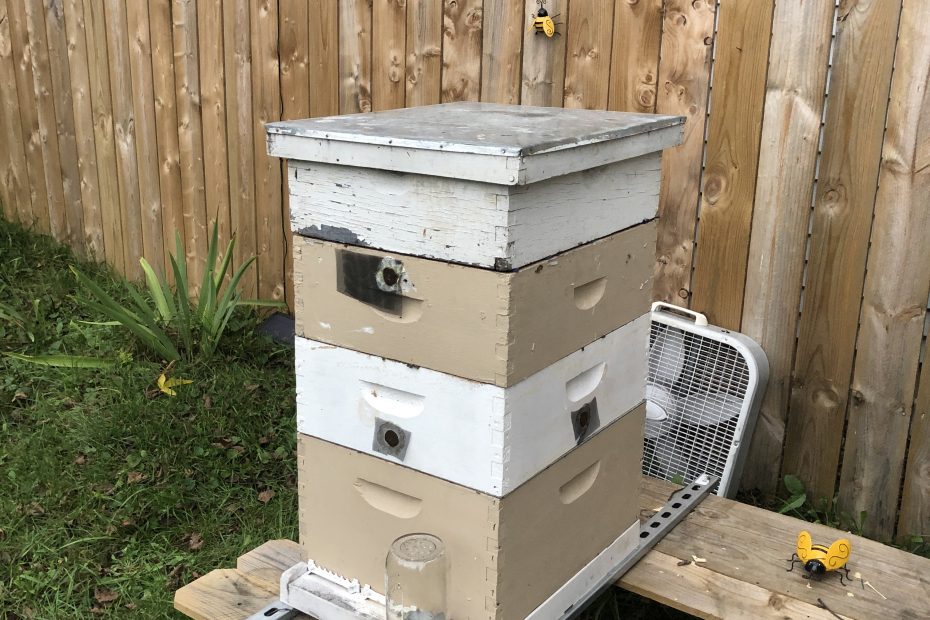 I just want to start off by saying I can’t believe we have come to the end of fall and it’s time to get the bees hunkered down for the winter.

We used similar techniques as we did last fall except for this year we chose not to harvest any of their honey. We chose to do this so that hopefully these hives will become more established than our last couple of years hives have been and will allow them enough food to hopefully survive the winter.

We did however chose to buy some feed for them from Hansen’s Honey Farm just in case their honey supply wasn’t enough for them. But after our last inspection we are almost certain there will be plenty of food source for them from their own work.

Below I will show you how we chose to winterize them and the supplies we used. This will be our second year doing this, when we did this last year they survived until February so we are hopeful they will make it until spring this year.

We have found that sometimes what works for some people does not work for everyone. This is all a trial and error until we find the best fit for our bees. Marks family had been beekeeping for generations and what they have done in the past has not worked for us, so we have taken some extra steps for what we think will work for us.

After doing some extensive research online. I found that chicken coop shavings work best for some people who winterize in colder snowy climates.

The bees will create their own moisture by keeping themselves warm inside the hive. They all huddle together to stay warm so if there are creating moisture there is a chance that with our very frigid temperatures, that they can freeze.

The chicken coop shavings are designed to pull moisture out of the hive, if there is any which more than likely there will be.

So you take an empty box and you staple a 100% cotton T-shirt to the bottom of the box. Pulling it tight so when the shavings are added, it doesn’t sag too terribly if you have to open the hive up later.

Once the cotton shirt is on, cut off any excess T-shirt so that it doesn’t soak up moisture and than fill the box with the shavings. Than place this empty box on top of the hive.

Both hives top boxes have a cotton T-shirt and shavings in the them. We chose to do this in early October due to previous years getting a TON of rain in October and than a solid freeze and they had too much moisture and they froze almost instantly. The shavings were to help prevent too much moisture early in the fall so if and when we had a good freeze, they did okay.

Now let’s jump forward to the first week in November. It was 50° and we had time to do our final hive check. We didn’t tear them apart as much as we have in the past throughout the summer (was actually Mark not me) so we wanted to do a quick look and just make sure they had enough food source.

When we opened up their lids, there were TONS of bees in the Carniolan hive. The Italians had a lot of bees as well but not nearly as much.

From what we could tell, there was plenty of honey. Almost each frame was full. We did not entirely tear them apart, we just looked in there and seen what we had. Everything looked good on our end.

Added some Feed with Hive Alive

This step was not necessarily needed but it has some good nutrients for the bees and helps keep them healthy so we decided to give it a try. Chris at Hansen’s Honey Farm had said that everyone who used it last year swore by it. Their bees loved it so we thought we would give it a try.

Due to the amount of honey they already have, they may not eat much of this but we shall see what happens. More food is better than none.

As you can see in the photo above, you cut a small square in the plastic, removing the small square you cut out and than place that down on the top box of bees. They will than go inside this bag and eat and distribute the feed throughout.

The last and final thing we do to keep the weather out, is we duct tape around that top box with the shavings. This keeps any excess rain or snow out of the T-shirt and keeps it dry. Obviously this is not 100 proof, but any little bit helps. See photos below!

So there you have it! The bees are closed up for the winter and hopefully survive this time around, we know we won’t be starving them like last year.

We will more than likely do a hive check come January, just to be sure they are eating their food and aren’t starving but by the looks of it, we think they will do just fine.

I will do another post if we check them out this winter, otherwise follow along until spring when we are able to do a full inspection on them! In the mean time, be sure to check out my recipes I share and give them a try! I always appreciate any comments, shares and pins!

Thank you for following us along on this journey with the bees and following my blog! I have been having so much fun with this and really do enjoy sharing with everyone !!